Gene Swanson, founder of Skagit Builders in 1968, had a solid 17 years of experience working in construction when he came home one night and told his wife Marie, “If you do the books, I’ll do the work.” And so began the history of Skagit Builders.

“We just did a good job and did it right the first time.”

Gene credits the early success of Skagit Builders to the fact that his good reputation provided for plenty of work, and he had chosen a great crew. “We just did a good job and did it right the first time.” He says personality helped as well. An open and approachable personality runs in the family. Gene’s son, Keith, worked summers for Skagit Builders while he was in college. Keith stayed on with his father’s company until Gene retired in 1994, and took over ownership from there. Since then, Keith continues to insist on producing the highest quality at the best price, and to listen to his clients’ input, mixing superior craftsmanship with the most modern techniques and best materials available. 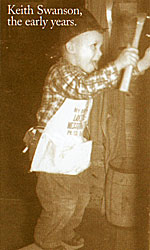 Owner Keith Swanson personally oversees each project, quality checking every detail, and suggesting ideas during the course of construction that continually improve upon the final outcome.